1/ My first question might be a bit of a classic but I would like to know what brought you to Photography. Who are your icons and can you explain why?

I started taking photographs when I was quite young and then abandoned it for a while. The school I was at when I was 10 had a darkroom and I spent lots of time messing around, it was pretty magical. Then I moved school and forgot about how much I liked photography for a while. Years later I ended up at art college doing a degree in Fine Art Sculpture, I started taking photos again as way of researching and then documenting sculptures. Gradually my interest in photography began to take over and I became increasingly interested in story telling.

I got really into William Egglestone and the New Topographics like Sternfeld and Shore, I’m still fascinated by their photographs. And I’m really interested in artists who deal with conflict and post-conflict spaces; Simon Norfolk, Broomberg and Chanerin, Sophie Ristelhueber, Paul Seawright, Donovan Wylie.

2/ Looking at the subjects you have dealt so far with can you explain how time is relevant to your methodology?

Lots of my work explores the layers in a landscape, the idea that events become imprinted in a place even if there are very few visual clues remaining. The work I made in Northern Ireland was looking at visual histories were being erased, yet a sense of what was there before remained. As a photographer I try to bring out that emotion within a place by shooting in a certain way. It’s quite manipulative, you are bringing something to the photograph to convey a sense of history and meaning.

I’m interested also interested in repetitive histories. For example how borders remain in the same place across a 1000 years. It’s something Peter Ackroyd writes about a lot and with the Ring of Steel project I found it fascinating that there was this consistent border which had remained during a time period of a thousand years, becoming increasingly less visible but still very present.


3/ In the follow up of my previous question, can you define your reasons, as much emotional as technological, why you choose to use film when photographing?

I do continue to use film a lot, particularly large format because I like the very long exposures that you can impose upon the photographic process. I’m less interested in freezing action within the frame. A long exposure helps to give a sense of time passing and being liquid. Particularly if you are shooting in the half light, which I tend to do.

But I also have did a project entirely on my Iphone [The Secret Security Guard was an undercover project] and I shoot video on the 5D Mark II for other projects. So I’m not stuck to film, I like to choose the medium according to what works best for the subject - both conceptually and practically. And I also use writing and mapping as other ways to explore projects.

It might be something that comes out of my background in Sculpture. Each project that you do can use something entirely new, so you have to keep learning and adapting, but that stops it from becoming repetitive.

3/ Your interests are diverse and thoroughly approached. Whether you are using your still camera, video, sound recording or writing skills you always intend to get closer to the core of your subjects. At the same time you successfully manage to keep a certain uncertainty and autonomy in the result. Could you explain how this complex alchemy works?

I’m really turned off by photographers who make work that forces me to feel a certain way. I prefer projects that ask questions and get the viewer to engage with a subject in a new way, but don’t lay it all out in black and white. I don’t believe the world is a simple as that, it’s the shades of grey I’m interested in. I want to make work that asks questions rather than gives all the answers. That’s the aim anyway.


4/ You are an engaged artist, or an artist who is not afraid to document the right to protest.
What do you think about the state of documentary photography today when it comes to express an idea? Is the photographic image still immune from a dialogue as it has been the case for quite some time now?

I’ve always seen photography as a medium to get across an idea. I don’t think it’s immune from dialogue at all. It’s just like a writer putting their thoughts across in words, it’s still a biased view that has been manipulated. What’s interesting about photography is that you can put two photographers at the same event and their images will look completely different and tell a completely different story.

I think documentary photography can be a really useful tool to express ideas, but sometimes it’s not the right tool. Then I’ll use video or writing. Or any other medium that seems appropriate. I’m most interested in the ideas behind the story, not the surface image. Although I do think the beauty of an image is important. Otherwise you can just use another tool.

5/ What do you think of the single image dilemma and complexity? Thanks or because of today's accessibility to the medium, do you think we are facing an impossible task by trying to persevere in Photographing? If not, what does the still image mean to you and do you think there is a whole unknown world to be embraced with the medium?

Commercially we’re already seeing video replacing still images, purely because we experience so much of our lives through the internet now. Online lends itself far more to moving image. I think that’s exciting and I’m exploring it. But I will always love the process of using large format cameras and film. It’s completely inpractical but there’s a quality to the images that is totally unique. They become objects once you print them, a sort of compression of a moment in time. But increasingly it feels to me like still images are for galleries, there’s isn’t going to be the breadth of outputs anymore. Everything changes, we just have to keep up.

6/ What makes you happy - apart from motor-biking around?


7/ To conclude, is  there any new artist or discovery that made your head spin recently?

I’m getting really into film at the moment, particularly documentaries. I loved 5 Broken Cameras, I want to make a film like that.

Posted by david BOULOGNE at 06:58 No comments: 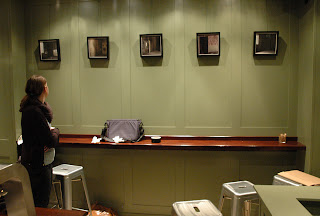 Posted by david BOULOGNE at 10:36 No comments: