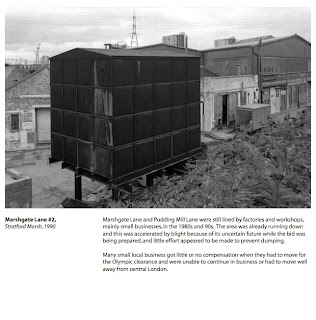 This is the turn of Peter Marshall to have his work presented at our residency space in Marylebone. Our SHORT STORIES FROM AN AUTONOMOUS SPACE project is today called Before the Olympics. You will find a new selection from Marshall's long experience of the East End to which he added a consistent text to read along each image.

In 1981 I began a long-term photographic project in the Lea Valley from the source of the river to the Thames at Limehouse and Bow Creek, concentrating on the urban changes which were taking place and have continued. As a part of this project I photographed the busy industrial area of Stratford Marsh and around the Bow Back Rivers, returning in the 1990s and the early 2000s and again after the Olympic bid was announced and then won, recording as far as I could it’s transformation from a productive area to the urban wasteland with scattered monumental structures it is today. I hope to continue the project to record the legacy of the Olympics when the area will be hopefully be returned from behind its high security fences to more productive use as a part of a wider project on urban development in East London.