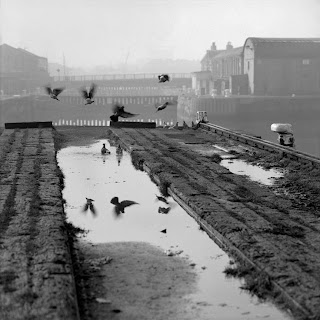 It was an immense pleasure today to hang photographs of the London Docklands with artist Mike Seaborne.
Short stories from an autonomous space residency takes us back to the end of an era in black and white.
Seaborne's pictures are cinematic, atmospheric and always surprising. By glancing at the ten prints you will be transported and captivated.

London Docklands 1983-4
With plans for redevelopment announced in the early 1980s, it was clear that London’s Docklands was soon to be transformed. Although the docks had been disused for many years they were still largely intact and I realised that this was the last chance to document a significant part of London’s industrial landscape before it disappeared for ever. It saddened me that the great industrial heritage represented by the docks and the communities of people who had devoted their lives to this once essential part of London’s economy would be swept away and replaced by new service industries that local people would not be qualified to work in and new up-market housing that they would not be able to afford.