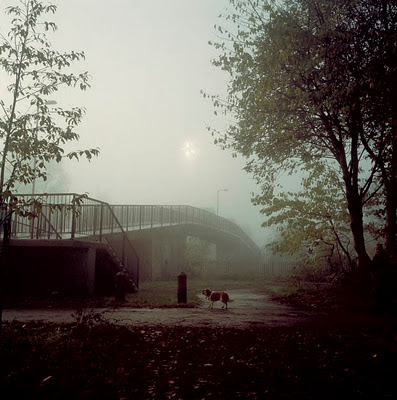 I have met Arnau Oriol Sanchez not so long ago through a connection. Photographer Ian Buswell told me he had a friend who was working around the Olympic site and was commissioned by the Hackney Museum to capture the daily of the borough. Not only I was keen on meeting the person itself but I was also intrigued by the generous offer from the Museum. So, first I visited the website and was directly immersed in a strange world that really appealed to me. The work was here again, like all photographers who are part of the platform, very personal, richly documented and shot with film. 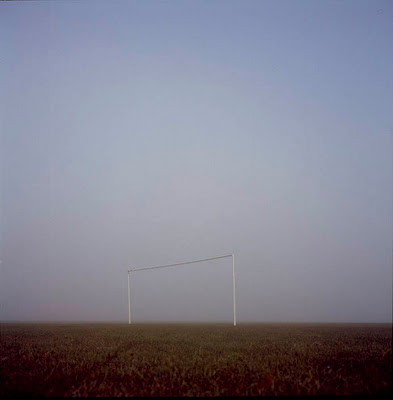 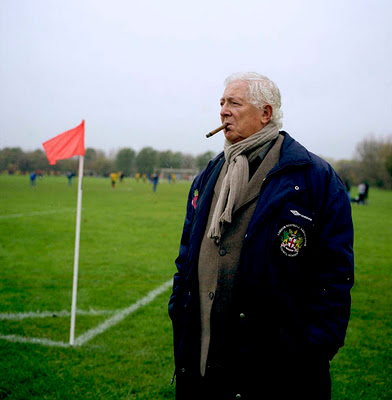 First, Oriol is using the 6x6 square format which may sound like unheard of to many, but I can definitely understand why. This camera has the ability to make you wonder (thinking and walking at glance) You become very attentive to the subtle changes of weather and it makes you really concentrate on the composition. Because of its peculiar use (looking down instead of pointing towards your subject) you are much more hidden from strangers, which is a great asset to have. This format really helps to isolate yourself from the world. And in that sense Oriol's photographs have this charming substance of taking us somewhere where we feel like privileged.
When using a 6x6 body the vision you get from the view finder is inverted. This "anomaly" is in fact a great tool. It makes you focus on the relevance of your composition and also always leaves you in a sort of doubt because it cannot accuratly show you what you are seeing. And that uniqueness leaves you in an exquisite state of vulnerability which carries on until you see the result.

To conclude on the technical side, Oriol is using not any sort of film but slide film. Which, for a portable Rolleiflex camera, is something quite strange to do. The compact 6x6 Rolleiflex is a sort of land camera quite similar to a standard manual 35mm camera or medium format that you carry quite often for documentary projects. You usually use it to photograph landscapes, portraits or street photography. And film negative has always been the most logical preference because of its extended latitude in the open space compare to the limited slide film. But here again, as you observe the quality of the images, you can understand why. It gives a very distinctive mood where densities and colours are battling for their own space and fusion at the same time. His over exposures technique not only gives more body but also produces that timeless introduction, not primarily in time but principally in space.The compositions are dense and almost palpable. The slide film is a risky alternative with documentary photography but Oriol has the confidence and intelligence to combine it with a great camera, and the result is captivating. 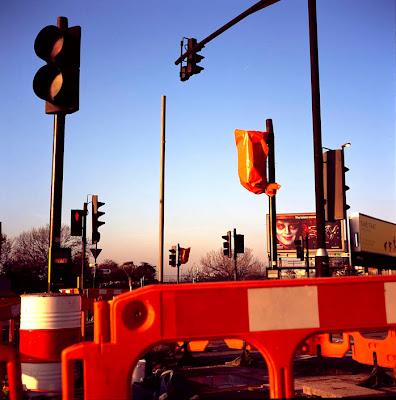 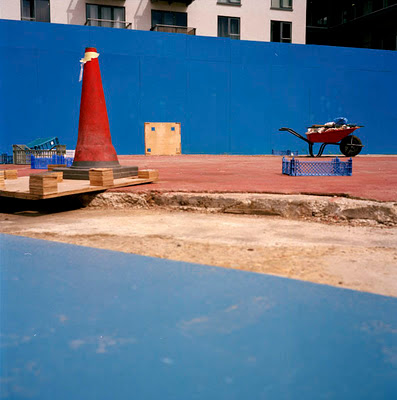 We are transported in a new dimension. I do know quite well those areas and characters but Arnau Oriol is taking me somewhere else. There is this underground charm or nightmary gaze that really grabs me. There is this feeling of being dragged into those places at this very moment, when the moment was lost in its essence. It's like if the photographer was not there to decide when and where to compose but more like the subjects were the guiders or deciders. He has been charmed by a divine call. The visions presented work well not because of their rational thinking but thanks to their incomprehensible attractiveness. We feel suddenly lost without any reference to our daily routine or memory. Oriol's characters and urban landscapes are no gimmicks. They are realities. But they exist in a transcendental universe, one that coexists alongside the known and accepted.

We can divide Oriol's body of work in three categories: portraiture, urban landscape in the move and documented landscape of the past/present. Those three distinctive parts constantly respond to one an other. The character gives substance to the past/present landscape which then evolves with the man response on the new architecture. There is this constant flow which you can take in all possible arrangements. This fluid dialogue between codes and situations is one of the key element. Not as if the politics or agendas are at stake but because the roots of the compositions are secretly linked, and inseparable in a unconscious way. They make us realise what the environment and Nature as a whole is. An accumulation of various sediments and still incomprehensible phenomenons that converge to make sense as a rhizome1. The layers of the past are embodied is the past/present landscapes and carried by those characters on the move for a new generation. This is what Oriol is remarkable at capturing by delivering of catalogue of ghostly visions. An under current which is as important as our rational objectives and results. He manages to reveal that paste, or quality, that sticks the whole scenery together in a way that no one would see or understand it. 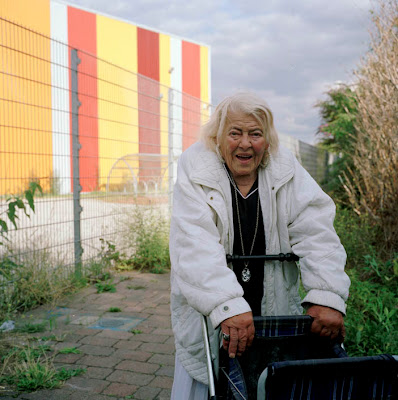 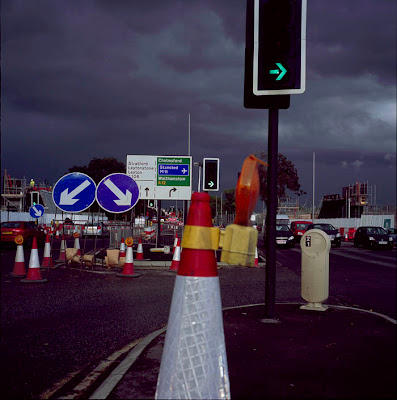 So once more the notion of Time is a strong statement in this on-going series. So far the project is called Pre-Olympic Landscapes. But Arnau might change it somehow later, we'll see as it is not over yet. He may find new tracks along the way and re-investigate the journey and its significance. He is currently shooting in the Peruvian jungle documenting the troubles caused by oil companies on local tribes. His work overall is definitely engaged but not in a traditional fashion. Let say that the common way of approaching documentary photography has been to let the subject speaks for itself. Which is true in one way, but if it only reveals what it simply shows then the aesthetic becomes as relevant as the message and is generally driven to support the message. Therefore the two apparatus are working together towards the same goal. More generally speaking the main aim of those two elements combined is to secure the delivery, or lets say to sell and confirm its significance. But there is none of that with Oriol's photographs. They do not exist as products of nostalgia or propaganda but as independent entities. They have this brilliant own autonomy and relevance as a body that make us look differently. They exist as icons and diffuse their wisdom to our scale as generators and observers of our environment. Oriol's photographs have this strength of being so independent that they do not need support from the author. They were just awaiting for him to collect them. There are revelations. 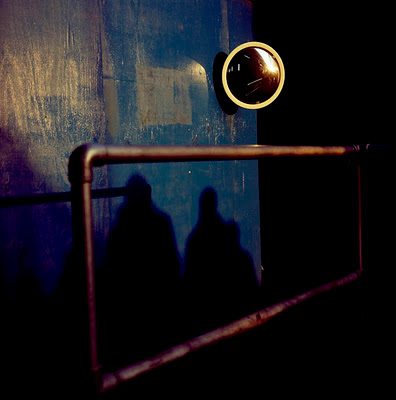 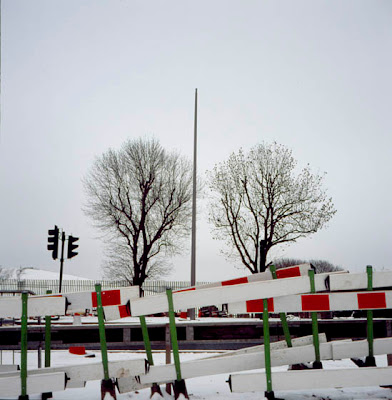 Oriol's photographs could be easily associated to Velasquez when it comes to isolate and take the challenge to portray the marginals. They are revealed as much in their grandeur and their unique simplicity or originality. It would be to simplistic too to classify the mood with the masters of psychological landscapes such as Munch or Caravaggio. They may eventually suit the emotion sprayed on the surface due to the colour range and density, but they do not engage in any sadness or mythology. The best connection that could not be ignored would be with filmmaker David Lynch in spite of the regular use the tabloids are making of him. But for once I would like to mention one Lynchian aspect which is barely mentioned, which is Humor. Oriol surprises by showing the odd within the large. Those details are carefully composed and do fusion naturally as an escape. They make the whole picture to float more than if their were just intending to transcend the drama. Oriol's images take the viewer in a peculiar journey where the emotions encompass as much mysteries as laughter. The obvious seriousness that first appears often vanishes to lead us to numerous surprises. The small dog may look like lost and sad at first but you can also look at it as a small stupid dog too! The football coach smoking a cigar is a bit of a joke! The lady with a trolley could be that strange human entity coming out of nowhere like in Mulholland Drive, but she is very happy to be photographed and fits perfectly with the bright new background, etc...

Oriol's images are as enigmatic as powerful. They are also very refreshing and motivating compare to the heavy Photographic heritage which has become obsolete . In a single twist he is using the old approach and turns it into something very contemporary. The author reveals a land of mysteries with a hint of derision. This is what the East-end is about, a outside land of tales and marginals. Most importantly Oriol' strength lies in his aptitude to ask the right questions with very personal angle, and certainly do not wish to find any answer. And this is what Art should be about. The Pre-Olympic landscapes are to me the best of Oriol's projects so far in his very early career. I am looking forward to seeing more of it... 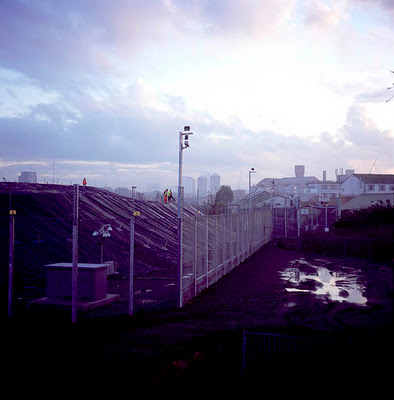