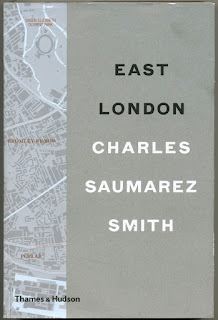 I was at Waterstones recently and quickly glanced through the latest of Photography books displayed.
This book written, compiled by Charles Saumarez-Smith and published by Thames & Hudson seemed a must have for my East End research. I liked the format, the fact there are pictures but also texts and a kind of methodology. After 10 minutes of reading it (or flipping through which would be the most appropriate word as it took my only an afternoon of lament) I felt so disappointed. This author, resident of the East End in Stepney for several years, has managed to persuade a big publisher to produced a solid hardback on a basis of very sketchy thoughts. I can't believe that with so many pages so very little is actually given. The research behind it is very poor and relies a lot on personal emotions resented throughout daily walk in his neighbourhood. It is as if he only scratched the surface of the old East-End in his spare time. The choice of areas is very amateurish and more importantly their contents. It comes with a very surprising and non-logical list of places. After reading his presentation Saumarez-Smith expresses the wish to present the change experienced in the East End. This sense of change doesn't appear anywhere and instead you will find a list of old landmarks with little to learn from. At the same time he feels important to mention places such as Dirty Burger in Stepney, and organic shop and next an old church!? The whole thing doesn't make any sense at all. On top of it, the layout which I first thought was interesting, to leave some white space with little images in a random order as a sort of patchwork reveals in fact a lack of coherence and a trick to take away our attention to the poor quality of the visuals. It becomes evident that the author has been photographing with a cheap compact camera or even mobile phone, hence the small visual windows. And some images are not even cropped properly! Well, let's keep it there and say it is a very poor attempt and I still cannot understand how such a big publishers accompanied by author reviews can produce and praise such a mediocrity! Please DO NOT BUY IT, you will waste your time and money!
Posted by david BOULOGNE at 10:12