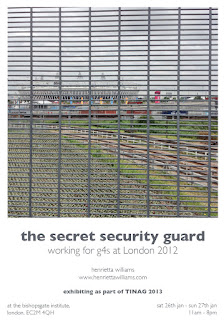 I am looking forward to seeing Henrietta Williams latest work at the new TINAG festival.
Following our last conversation I can say that Williams has kept those materials on hold for a few months as she was also reporting for a national newspaper undercover. Today she can display freely those rare and somehow recent documents. It will certainly engage criticism and broad discussions in the most progressive and intelligent festival available in London. We will hopefully discuss its content soon in an interview.
If you want to know more about the festival go to http://www.thisisnotagateway.net/
This year the festival is taking place at the Bishopsgate Institute EC2M 4QH Liverpool St.

The Olympic Games held in London in the summer of 2012 marked a shift – a rubicon in the way our city operates. The army patrolled the streets, missiles were placed on rooftops, battleships were moored on the River Thames, surveillance blimps monitored us from the sky above, protests were banned and 30,000 new CCTV cameras were installed.
Within this State controlled environment companies specializing in security and defence reported a massive increase in profits. None more so than G4S, the largest private security company in the world, employing 657,000 people in 125 countries. G4S were awarded the £284 million contract to deliver security for London 2012, with chaotic consequences.
Henrietta Williams interviewed with G4S in January and, after training in March and July, ended up working as a security guard and x-ray screener based at the Olympic Park in Stratford for the duration of the Games in July and August 2012. Alongside fulfilling her duties for G4S she also worked as an undercover reporter for the Guardian writing a column called ‘The Secret Security Guard’.
Henrietta also consistently photographed her shifts covertly on her iPhone. Exhibited alongside artifacts from the job, this body of photographs shows a world of mundane chaos behind the scenes of the Olympics: recruits being trained in methods of restraint; deployment alongside the army at the Olympics; the monotony of guarding and working the x-ray screening machines; images of the fortification of the Olympic site; and the haunting emptiness of the park on night shifts. These are images of people dressed in G4S uniforms playing at being security guards – a moment in time when hyper-security became normal.
Posted by david BOULOGNE at 14:40 No comments: 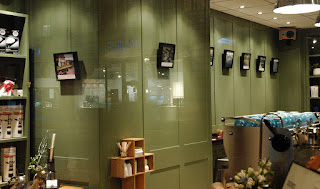