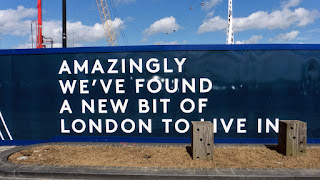 I love walking around and see how the East-End is morphing still. I am particularly sensitive to boards and all sorts or writings, either legals or not. I was trying out the Emirates cable cars in North Greenwich with my daughter, and I frankly didn't feel secure as it was a windy day. Right in the middle of our journey I felt like I really had to talk to my neighbour to keep me away from panic. He looked dressed like for a daily commute, a sort of local engineer in his late forties. I said I suspected that one of the new "rejuvenation" program was taking place here under our feet. He definitely agreed as he spent the last few months on various building sites and would fly above the Thames daily. "That's the next big thing" he said - to be continued.
As we reached safely the grounds we walked towards the O2 and I found this bit of writing above that made me smile, sort of. 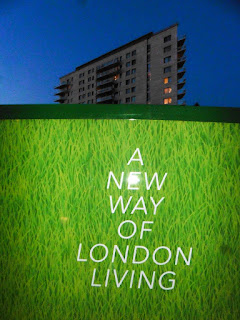 A week later, I was doing some tests for a future photo installation about the new E20 district in Stratford. Waiting for a friend I found various local adverts and took few snapshots. I thought it was funny to put those two as a dialogue. 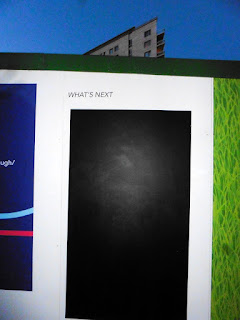 Posted by david BOULOGNE at 14:51 No comments:

Some really exciting news for us this week! The Longest Way Round by Chris Dorley Brown is a finalist in the 2016 British Book Design & Production Awards, in the Photographic Books, Art/Architecture Monographs category. Five judges selected from 575 high quality entries, and category contenders include Grayson Perry's Sketchbooks. Awards will be announced November 10th - see the full list: http://www.britishbookawards.org/shortlist-2016/
Posted by david BOULOGNE at 12:10 No comments: 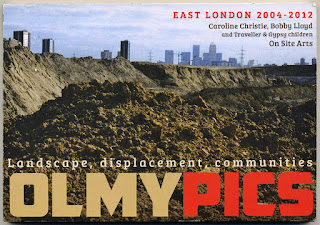 My local charity shop is always full of surprises and I find little gems quite often. Here is the latest called OlMyPics and produced between 2004 and 2012 (apparently). Photographic collaboration between Caroline Christie, Bobby Lloyd and Travellers & Gypsy kids. I have never heard of that project to be honest. Even more surprised it has been commissioned, funded and even toured. 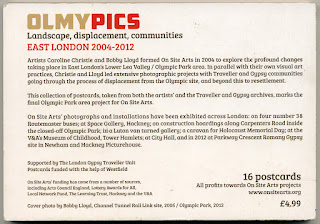 I wanted to post a photograph of the Lea River by Eton Manor Walk, view which is dear to me, but this time it has been shot by Marty, aged 10, and it is tilted Looking down River Lea 2004 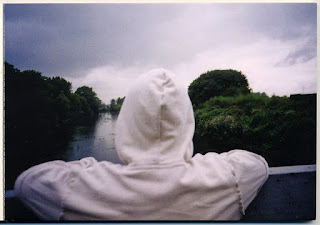 Posted by david BOULOGNE at 17:42 No comments: 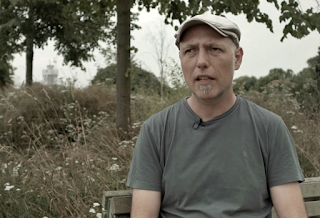