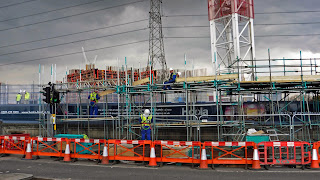 After completing my previous major series Arteries of a new East it appeared clearly that the next area on the list of regeneration would be Silvertown. It has plenty of vacant spaces and quiet surroundings despite the constant air traffic from City Airport. It has plenty to offer, a lot of potential from its strategic and unique location. Isolated from most major roads, Silvertown has a singular pace due to its peculiar relationship with the Thames that surrounds its parameters inside-out. It is ideally located for the ones who work in Canary Wharf. It is also few stops away from the new Stratford hub and of course minutes away from the airport which must be one of the best in UK.

I started my walk from Canning Town towards the southern parts. I then curved my way up to Gallions Reach which is a sort of dead end. I then walked along the north banks of the bassin through the UEL district, Beckton Parks and Excel exhibition centre. Finally back to the new Canning Town train station approach with a view on the emerging LondonCityIsland development.

Silvertown is changing rapidly. It has been an industrial hub in the early XXth Century and it declined progressively similarly to the rest of the East End. Canary Wharf, DLR and Airport were built one after the other to suit the idea of making financial business more fluent and practical. Beckton was the nearest residential area whereas the rest of the peninsula hosted the ghosts from an industrial past. But today London must build more to house its ever growing population. After the 2012 Olympics it suddenly became all too obvious that we couldn't afford to invade the land   horizontally and consequently the East End is embracing the vertical more than anywhere else in UK.

To build this way is certainly an inevitable way forward to all major cities but what gives you the vertigo isn't their height but their prices. As usual politicians, property developers and councils adapt the charitable lie to benefit the local communities first in those new projects. Of course, the reality is a different story. Only the richest can afford them and most commonly foreign investors. 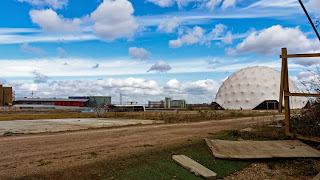