THE ART OF DISSENT 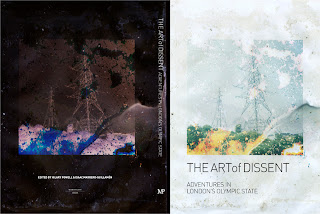 We are proud to see three of our photographers being invited to show their works in this heavyweight publication. Chris Dorley-Brown, Alessandra Chila and David George have been selected to present their personal visions of the East-End as we approach the Olympic Games. Marshgate Press has not only gathered visual talents but also very high profile writers and analysts. You can find all the info following this link

This project is also a show.

See Studio presents The Art of Dissent, a group show displaying work created in response to the London Olympics and the radical transformation of the Lower Lee Valley brought about by it (all contributors to the book ‘The Art of Dissent: Adventures in London’s Olympic State.) The works included in the exhibition actively resist the Games’ consensual symbols and images; they activate the history of Hackney Wick and the marshes against the politics of effacement, and critically explore the imprint of London’s Olympic State.
Jessie Brennan, Alessandra Chilá, Chris Dorley-Brown, Fantich & Young, David George, Giles Price, Jim Woodall, Gesche Würfel.
Associated events at See Studio include artists talks and films 6-9pm 2nd August as part of TimeOut First Thursdays.
See Studio is an Exhibition Space in Hackney Wick, London adjacent to the Olympic Park that commissions and works with artists, designers, photographers, and film-makers to produce creative commercial solutions as well as innovative new artwork for exhibition and publishing purposes.
13 Prince Edward Rd, London, E9 5LX
0208 986 6477
info@seestudio.com
Posted by david BOULOGNE at 12:19